The Most Inspirational Music Quotes Cute Quotes from Popular Songs


It’s my life
and it’s now or never!
Cause I ain’t gonna live forever,
I just want live while I’m alive
It’s my life!
– Bon Jovi, It’s My Life


Have you been searching for a catchy slogan on music in English? You won’t do without some of the best sayings proving that music is life.


If I had my life to live over again, I would have made a rule to read some poetry and listen to some music at least once every week. – Charles Darwin


Music is the divine way to tell beautiful, poetic things to the heart..
–Pablo Casals


If I were not a physicist, I would probably be a musician. I often think in music. I live my daydreams in music. I see my life in terms of music.
– Albert Einstein 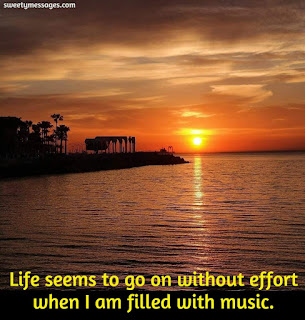 Life seems to go on without effort when I am filled with music.
– George Eliot


Music gives a soul to the universe, wings to the mind, flight to the imagination and life to everything.
– Plato


Music is a weapon in the war against unhappiness.
– Jason Mraz


Music is my religion.
– Jimi Hendrix


Without music, life would be a mistake.
– Friedrich Nietzsche


Music is the shorthand of emotion.
– Leo Tolstoy


Music is well said to be the speech of angels.
– Thomas Carlyle


Music is the soundtrack of your life.
– Dick Clark


Music is a proud, temperamental mistress. Give her the time and attention she deserves, and she is yours. Slight her and there will come a day when you call and she will not answer. So I began sleeping less to give her the time she needed.
– Patrick Rothfuss


I may not believe in myself, but I believe in what I’m doing.
– Jimmy Page


Music is spiritual. The music business is not.
– Van Morrison


Wanting to be someone else is a waste of the person you are.
– Kurt Cobain


If everyone demanded peace instead of another television set, then there’d be peace.
– John Lennon


When the power of love overcomes the love of power the world will know peace.
– Jimi Hendrix


Music is a way to dream together and go to another dimension.
– Cecilia Bartoli


After silence, that which comes nearest to expressing the inexpressible is music.
– Aldous Huxley


The power of music makes all the difference to me with motivation throughout the day.
– Paul Brodie


Music is the literature of the heart; it commences where speech ends.
– lphonse de Lamartine


He took his pain and turned it into something beautiful. Into something that people connect to. And that’s what good music does. It speaks to you. It changes you.
– Hannah Harrington


Music is to the soul what words are to the mind.
– Modest Mouse


Music in the soul can be heard by the universe.
– Lao Tzu


Music is an outburst of the soul.
– Frederick Delius


Music, once admitted to the soul, becomes a sort of spirit, and never dies.
– Edward Bulwer-Lytton


Music is the language of the spirit. It opens the secret of life bringing peace, abolishing strife.
– Kahlil Gibran


One good thing about music, when it hits you, you feel no pain.
– Bob Marley


Music expresses what cannot be put into words I like to think, and I think the band makes a good go at it.
– Steven Tyler ‘Aerosmith’


We learned pretty early on in this band that you can’t have snobbery in music.
–Mike Shinoda ‘Linkin Park’


I have so much music inside me I’m just trying to stay afloat. I don’t tend to write for a particular band – you have to just write the songs and then let God into the room and let the music tell you what to do.
– Jack White ‘The White Stripes’


Lose your dreams and you might lose your mind.
– Mick Jagger ‘The Rolling Stones


I think music in itself is healing. It’s an explosive expression of humanity. It’s something we are all touched by. No matter what culture we’re from, everyone loves music.
–  Billy Joel


Music, once admitted to the soul, becomes a sort of spirit, and never dies.
- Edward Bulwer-Lytton


Music was a healing thing for me.
–  Andrea Bocelli


Music is the message of peace, and music only brings peace.
–  Zubin Mehta


Music brings a warm glow to my vision, thawing mind and muscle from their endless wintering.
–  Haruki Murakami


A song is a favorite song, not because the singer can hit and hold a high note, but because of the words, their meaning.
– Taylor Swift


Music is the wine that fills the cup of silence.
– Robert Fripp


Good music is good music, and everything else can go to hell.
– Dave Matthews


I was fairly poor but most of my money went for wine and classical music. I loved to mix the two together.
– Charles Bukowski


When I hear music, I fear no danger. I am invulnerable. I see no foe. I am related to the earliest times, and to the latest.
– Henry David Thoreau


Music drives you. It wakes you up, it gets you pumping. And, at the end of the day, the correct tune will chill you down.
– Dimebag Darrell


Music is the universal language of mankind.
– Henry Wadsworth Longfellow


I need music. It’s like my heartbeat, so to speak. It keeps me going no matter what’s going on – bad games, press, whatever!
– LeBron James


If one should desire to know whether a kingdom is well governed, if its morals are good or bad, the quality of its music will furnish the answer.
– Confucius


Life is like a beautiful melody, only the lyrics are messed up.
– Hans Christian Andersen


I believe 100 percent in the power and importance of music.
– James Taylor


Music produces a kind of pleasure which human nature cannot do without.
– Confucius


Music is forever; music should grow and mature with you, following you right on up until you die.
– Paul Simon


Music is the great uniter. An incredible force. Something that people who differ on everything and anything else can have in common.
– Sarah Dessen


A man should hear a little music […] in order that worldly cares may not obliterate the sense of the beautiful which God has implanted in the human soul.
– Johann Wolfgang von Goethe


Life seems to go on without effort when I am filled with music.
– George Eliot


Who would miss the chance of sharing music with one’s friends? How about sharing these awesome quotes about the love of listening to music as well?
We just can’t get enough of music quotes and how about you? Are you ready to read some profound quotes on music?
There’s no need to prove the importance of music to a true music lover. However, those of you who still have a doubt in this statement should check these quotes out.
Even one word from a song of your favorite music band can change the whole life direction. If this hasn’t happened to you yet, read these inspirational quotes by famous bands.
Music is all about emotions you can experience while you are listening to it.
If you enjoy listening to music the way we do, you will definitely enjoy reading the motivational music quotes.
Do you want to know what did famous classical music composers say about music? Read the most beautiful quotes about classical music and find out.