True leadership stems from individuality that is honestly and sometimes imperfectly expressed… Leaders should strive for authenticity over perfection.
– Sheryl Sandberg


It doesn’t matter how many times you get knocked down. All that matters is you get up one more time than you were knocked down.
–  Roy T. Bennett


The leader is one who, out of the clutter, brings simplicity… Out of discord, harmony… And out of difficult, opportunity.
–  Albert Einstein


My jobs as a leader is to make sure everybody in the company has great opportunities, and that they feel they’re having a meaningful impact.
– Larry Page 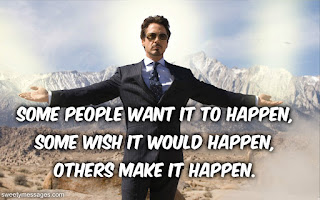 Some people want it to happen, some wish it would happen, others make it happen.
– Michael Jordan

A leader is a dealer in hope.
– Napoleon Bonaparte


Leaders must be close enough to relate to others, but far enough ahead to motivate them.
–  John C. Maxwell


A man who wants to lead the orchestra must turn his back on the crowd.
–  Max Lucado


People who succeed at the highest level are not lucky; they’re doing something differently than everyone else.
– Tony Robbins


The teacher who awakens and encourages in students a sense of possibility and responsibility is, to me, the ultimate leader.
–  Stanley McChrystal


Leadership and learning are indispensable to each other.
– John F. Kennedy


Success is not how high you have climbed, but how you make a positive difference to the world.
–  Roy T. Bennett, The Light in the Heart


Develop success from failures. Discouragement and failure are two of the surest stepping stones to success.
– Dale Carnegie


To have long term success as a coach or in any position of leadership, you have to be obsessed in some way.– Pat Riley
– Daniel Lubetzky


The mark of a great man is one who knows when to set aside the important things in order to accomplish the vital ones.
– Brandon Sanderson


The ability to learn is the most important quality a leader can have.
– Sheryl Sandberg


Communication is the most important skill any leader can possess.
– Richard Branson


Leaders must be close enough to relate to others, but far enough ahead to motivate them.
– John C. Maxwell


Innovation distinguishes between a leader and a follower.
– Steve Jobs


Employees of servant leaders are more helping and creative than those working with leaders who scored lower on servant leadership.
– Marcel Schwantes
– Alexander the Great


I suppose leadership at one time meant muscles; but today it means getting along with people.
– Mahatma Gandhi


In periods where there is no leadership, society stands still. Progress occurs when courageous, skillful leaders seize the opportunity to change things for the better.
– Harry Truman

In this section, you will find the most powerful quotes and sayings about leadership and change from artists, philosophers, business and national leaders.

We’ve collected only the best quotes about leadership in business and management so you could pick your favorites.

Form a new habit of learning something new every day. That’s when short leadership quotes of the day will definitely come in handy.

Success comes to those who aren’t afraid to take risks and know how to make the best of the situation. Successful leader quotes will help you to deal with problems and succeed.