A good head and a good heart are always a formidable combination. Nelson Mandela

For to be free is not merely to cast off one’s chains, but to live in a way that respects and enhances the freedom of others. Nelson Mandela

I am not a saint, unless you think of a saint as a sinner who keeps on trying. Nelson Mandela


Give a child love, laughter and peace, not AIDS. Nelson Mandela


A nation should not be judged by how it treats its highest citizens, but its lowest ones.


Overcoming poverty is not a task of charity; it is an act of justice. Like slavery and apartheid, poverty is not natural. It is man-made and it can be overcome and eradicated by the actions of human beings. Sometimes it falls on a generation to be great. You can be that great generation. Let your greatness blossom. 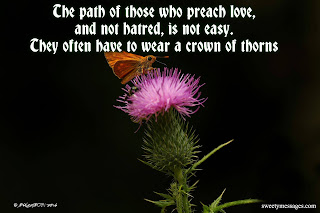 The path of those who preach love, and not hatred, is not easy. They often have to wear a crown of thorns.


There is no passion to be found playing small - in settling for a life that is less than the one you are capable of living.


What counts in life is not the mere fact that we have lived. It is what difference we have made to the lives of others that will determine the significance of the life we lead.


A good head and a good heart are always a formidable combination.


I hate race discrimination most intensely and in all its manifestations. I have fought it all during my life; I fight it now and will do so until the end of my days.