Wise Quotes on Effort in Relationship

A silent hug means a thousand words to the unhappy heart.


Failure is the hallmark of success it can be the starting point of new venture, such as when a baby learns to walk; it has to fall down a lot to learn the new skill. Each failure becomes a starting point for the next effort proving that failure is not failure. – Destiny Madu


Nobody gets through life without losing someone they love, someone they need, or something they thought was meant to be.  But it is these losses that make us stronger and eventually move us toward future opportunities.

Great things in business are never done by one person. They’re done by a team of people. – Steve Jobs


Your dreams will take time. It will take efforts and require dedication and sacrifice. But in the end it WILL be worth it.
Anurag Prakash Ray


No one succeeds without effort... Those who succeed owe their success to perseverance.
Ramana Maharshi 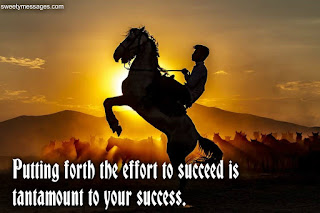 Putting forth the effort to succeed is tantamount to your success.
Jon Jones


Progress can be slow and gradual. Continue putting in effort with patience, enthusiasm and faith.
Mata Amritanandamayi


Life can be boring unless you put some effort into it.
John C. Maxwell

Be the friend that you want to have.


There are times when family are like strangers, and strangers are like family.  Both sets of people are priceless.

Healey’s First Law Of Holes: When in one, stop digging.
Denis Healey


And no one ever told me about the laziness of grief. Except at my job--where the machine seems to run on much as usual--I loathe the slightest effort. Not only writing but even reading a letter is too much.
C.S. Lewis, A Grief Observed


There's no such thing as effortless beauty--you should know that.


There's no effort which is not beautiful--lifting a heavy stone or loving you.


Loving you is like lifting a heavy stone. It would be easier not to do it and I'm not quite sure why I am doing it. It takes all my strength and all my determination, and I said I wouldn't love someone again like this. Is there any sense in loving someone you can only wake up to by chance?
Jeanette Winterson, The Powerbook


One bulb at a time. There was no other way to do it. No shortcuts--simply loving the slow process of planting. Loving the work as it unfolded. Loving an achievement that grew slowly and bloomed for only three weeks each year.
Jaroldeen Asplund Edwards, The Daffodill Principle


Our toil must be in silence, and our efforts all in secret; for this enlightened age, when men believe not even what they see, the doubting of wise men would be his greatest strength.
Bram Stoker, Dracula


Continuous effort - not strength or intelligence - is the key to unlocking our potential.
Winston Churchill


Even if you aren’t full of enthusiasm about an upcoming project or you are simply exhausted, remember that you always have to be ready to go the extra mile.


If you have a positive attitude and constantly strive to give your best effort, eventually you will overcome your immediate problems and find you are ready for greater challenges. – Pat Riley


Be willing to give that extra effort that separates the winner from the one in second place. – H. Jackson Brown Jr.


Gold medals are made out of sweat, blood and tears and effort in the gym every day. – Gabby Douglas


You find that you have peace of mind and can enjoy yourself, get more sleep, and rest when you know that it was a one hundred percent effort that you gave–win or lose.– Gordie Howe


I’m not the smartest fellow in the world, but I sure can pick smart colleagues. – Franklin D. Roosevelt


Individually, we are one drop. Together, we are an ocean. – Ryunosuke Satoro


Do the best you can in every task, no matter how unimportant it may seem at the time. No one learns more about a problem than the person at the bottom.
Sandra Day O'Connor


Nothing [...] will ever be attempted, if all possible objections must be first overcome.
Samuel Johnson, The History of Rasselas, Prince of Abissinia


The less effort, the faster and more powerful you will be.
Bruce Lee

An effort made for the happiness of others lifts above ourselves.
Lydia M. Child


Effort is only effort when it begins to hurt.
Jose Ortega Y Gasset


The mode by which the inevitable comes to pass is effort.
Oliver Wendell Holmes


What is written without effort is in general read without pleasure. – Samuel Johnson

When something can be read without effort, great effort has gone into its writing. – Enrique Jardiel Poncela


Effort is the extension of the will; without a will, without determination, there can be no effort. – Byron Pulsifer