Do a little more each day than you think you possibly can. – Lowell Thomas


The difference between ordinary and extraordinary is that little extra. – Jimmy Johnson


There is often a much simpler way of doing things – if you make the effort to look for it. – Edward de Bono


Progress can be slow and gradual. Continue putting in effort with patience, enthusiasm and faith. – Mata Amritanandamayi


The bitter and the sweet come from the outside, the hard from within, from one’s own efforts. – Albert Einstein 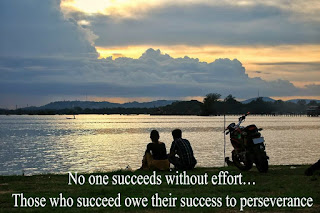 No one succeeds without effort… Those who succeed owe their success to perseverance. – Ramana Maharshi

Continuous effort – not strength or intelligence – is the key to unlocking our potential. – Winston Churchill


Happiness lies in the joy of achievement and the thrill of creative effort. –  Franklin D. Roosevelt


When he took time to help the man up the mountain, lo, he scaled it himself. – Tibetan Proverb


Never doubt that a small group of thoughtful, committed people can change the world. Indeed. It is the only thing that ever has. – Margaret Mead

Sportsmen know more about the importance of pushing themselves to the limits than anybody else. Why not listen to their pieces of advice?


Success in anything will always come down to this:  Focus & Effort, and we control both of them. – Dwayne “The Rock” Johnson


If you put forth the effort, good things will be bestowed upon you. – Michael Jordan


Life-changing Quotes About What to Expect with No Effort

Enthusiasm is the mother of effort, and without it nothing great was ever achieved.
Ralph Waldo Emerson


Happiness is not in the mere possession of money; it lies in the joy of achievement, in the thrill of creative effort.
Franklin D. Roosevelt


People die all the time. Life is a lot more fragile than we think. So you should treat others in a way that leaves no regrets. Fairly, and if possible, sincerely. It's too easy not to make the effort, then weep and wring your hands after the person dies.
Haruki Murakami, Dance Dance Dance


What is written without effort is in general read without pleasure.
Samuel Johnson, Johnsonian Miscellanies - Vol II


The labours of men of genius, however erroneously directed, scarcely ever fail in ultimately turning to the solid advantage of mankind.
Mary Wollstonecraft Shelley


Celia." he says without looking up at her, "why do we wind our watch?"
"Because everything requires energy," she recites obediently, eyes still focused on her hand. "We must put effort and energy into anything we wish to change.
Erin Morgenstern, The Night Circus


The unselfish effort to bring cheer to others will be the beginning of a happier life for ourselves.
Helen Keller


The bitter and the sweet come from the outside, the hard from within, from one's own efforts.
Albert Einstein


Leaders are made, they are not born. They are made by hard effort, which is the price which all of us must pay to achieve any goal that is worthwhile.– Vince Lombardi


The man who succeeds is a man who has withstood the tests of time, trials, and has made every effort count. – Hermann J. Steinherr


Mental toughness with extreme effort is the formula for success. – Mark Wiggins

Satisfaction lies in the effort, not in the attainment, full effort is full victory.
Mahatma Gandhi

Respect your efforts, respect yourself. Self-respect leads to self-discipline. When you have both firmly under your belt, that's real power.
Clint Eastwood

Quality is never an accident. It is always the result of intelligent effort.
John Ruskin

People pretend not to like grapes when the vines are too high for them to reach.
Marguerite de

Profound Quotes About Putting in Effort and Getting Nothing in Return

There are only two kinds of men in this world: Honest men and dishonest men. ...Any man who says the world owes him a living is dishonest. The same God that made you and me made this earth. And He planned it so that it would yield every single thing that the people on it need. But He was careful to plan it so that it would only yield up its wealth in exchange for the labor of man. Any man who tries to share in that wealth without contributing the work of his brain or his hands is dishonest.”
Ralph Moody

I know I have a pretty good sense for music, but she was better than me. I used to think it was such a waste! I thought, ‘If only she had started out with a good teacher and gotten the proper training, she’d be so much further along!’ But I was wrong about that. She was not the kind of child who could stand proper training. There just happen to be people like that. They’re blessed with this marvelous talent, but they can’t make the effort to systematize it. They end up squandering it in little bits and pieces. I’ve seen my share of people like that. At first you think they’re amazing. Like, they can sight-read some terrifically difficult piece and do a damn good job playing it all the way through. You see them do it, and you’re overwhelmed. you think, ‘I could never do that in a million years.’ But that’s as far as they go. They can’t take it any further. And why not? Because they won’t put in the effort. Because they haven’t had the discipline pounded into them. They’ve been spoiled. They have just enough talent so they’ve been able to play things well without any effort and they’ve had people telling them how great they are from the time they’re little, so hard work looks stupid to them. They’ll take some piece another kid has to work on for three weeks and polish it off in half the time, so the teacher figures they’ve put enough into it and lets them go to the next thing. And they do that in half the time and go on to the next piece. They never find out what it means to be hammered by the teacher; they lose out on a certain element required or character building. It’s a tragedy.
Haruki Murakami, Norwegian Wood

Don’t chase. Know your worth and know that you deserve to at least be met half way. If they don’t match your effort, they don’t want to be in your life. – Tony Gaskins

The unselfish effort to bring cheer to others will be the beginning of a happier life for ourselves. – Helen Keller

Effort is only effort when it begins to hurt. – Jose Ortega Y Gasset

Have you ever found yourself in a tricky situation when you are the only one putting in a massive effort and all you get in return is nothing? Well, you are not alone with this problem. Find the answers to your questions in these profound quotes.