Pray to Allah sincerely believing it will be answered. Allah does not respond to prayers from a frivolous and indifferent heart
Jumma Mubarak!


May the Lord Almighty grant us to be among the blissful believers who attain salvation and become neighbors to our Prophet (pbuh) in alFirdaws.
Jummah Mubarak!


Prayer means meeting our brothers and sisters.
It means solidifying our brotherhood and love for the Ummah.
We cannot act selfish when we pray.
We cannot only think for ourselves.
We pray also for brothers and sisters around the world knowing praying on their behalf will be accepted.
Because the Prophet (s.a.w.) told Caliph Umar who asked for permission to go to the Hajj: “O brother!
Make us partners in your prayer, remember us
Jumma Mubarak!

O brother! Make us partners in your prayer, remember us
Jumma Mubarak!


Prayer means aspiring noble values.
The prayers that our Prophet taught us do not only include asking for material needs. On the contrary, his prayers ask for morals and virtue, merits that elevate a human being.
His prayers are about ensuring love, respect, fondness, mercy, justice, and peace in society.
His prayers are a desire to be guarded against dishonor, living in abomination and in constant need of others, and against immorality.
Jumma Mubarak!


May the Almighty never spare us the abundance and power of prayer. May He grant us to be among the happy ones whose prayers are answered
Jumma Mubarak! 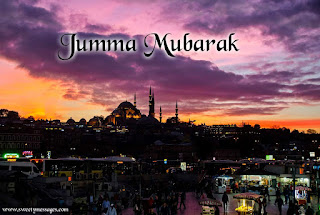 O Allah! We ask of You the right path, piety, dignity, and generosity of the heart.
O Allah, we seek Your shelter against mischief, sedition, and bad character.
O Allah, we seek refuge in You from knowledge that is of no use, from heart that does not tremble, from
soul that is not satisfied, and from prayer that is not answered.
O Lord! Grant us goodness in the world.
Grant us goodness in the Hereafter. Protect us from the torment of the Fire.
Jumma Mubarak!


O Lord! Make the Ummah of Islam glorious again!
Grant Your mercy upon our martyrs who have sacrificed their lives for the survival and peace of our nation and country!
Grant patience to their relatives and our nation!
Grant us to be among those who embrace and preserve the noble values the martyrs have died for!
Jumma Mubarak!

Indeed, those who have said, ‘Our Lord is Allah’ and then remained on a right course; the angels will descend upon them saying, ‘Do not fear and do not grieve but receive good tidings of Paradise, which you were promised...
Jumma Mubarak! 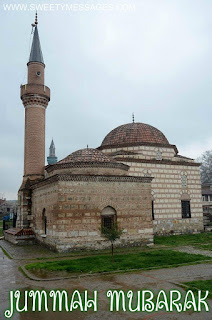 A believer is like a honeybee. He always eats good, clean, lawful things like the bee.
He always produces good things, always purses goodness.
He never breaks or ruin anything...
Jumma Mubarak!


The believer is one who sincerely believes in the existence and oneness of Allah.
They unwaveringly acknowledge Allah’s angels, books, prophets; the afterlife, destiny, and what Muhammad Mustafa (pbuh) brought from the ranks of Allah.
The believer is the person who turns the Prophet’s exemplary morality into a life.
Jumma Mubarak!


The believers presented to us in the Quran are those cognizant of the purpose and wisdom in their creation.
They think, remember, and reflect upon what they see, hear, and experience.
They live with the awareness of being servants and worshipping.
They perform their prayers with conscious and in submission and consider them ascension.
They give charity merely for Allah’s sake from the heart.
They make their fast a shield against evil.
Jumma Mubarak!


Believers are true servants of the Compassionate.
Their hearts are satisfied with the remembrance of and gratitude to Allah.
They feel a heartfelt, deep respect when His name is mentioned.
They are not deaf or blind to the verses, commandments, and bans of Allah.
They strive to understand them all accurately and implement them in the best way.
Jumma Mubarak!


There came after them successors who neglected prayer and pursued desires; so they are going to meet evil.
Jumma Mubarak!


Prayer becomes a warrant for light, proof, and salvation on the Day for those who regularly perform it
Jumma Mubarak!


Prayer protects us as long as we protect it.
It preservers us so long as we preserve it.
It never spares us its generosity.
All we need to do is to not spare ourselves prayer.
Prayer never shies away from elevating us.
All we need to do is to elevate our prayer with our sincerity.
Prayer never draws away from us, it does not deprive us of closeness to our Lord.
All we need to do is to not draw away from prayer. Despite all that, we immerse ourselves
so much in the flow of life that we either can’t perform our prayers on time or leave it.
However, our Prophet (pbuh) said the best prayer was the one performed on time.
He said to his distinguished muezzin, “Get up, o Bilal! Refresh us with prayer!” and eased the intensity of life with prayer.
He took away his exhaustion with prayer. He found peace with prayer.
Jumma Mubarak!


O mankind, fear your Lord, who created you from one soul and created from it its mate and dispersed from both of them many men and women.
And fear Allah, through whom you ask one another, and the wombs that bore you.
Indeed Allah is ever, over you, an Observer
Jumma Mubarak!


The most mature of believers are those best in character.
And the best of you are those who treat their wives in the best way
Jumma Mubarak!


Marriage is not just a formal ritual that brings two bodies together.
It is the promise couples make to one another to share a lifetime with Allah Almighty as their witness.
It is a pact, it is an agreement, and it is an oath.
For it is a pact and a treaty, i.e. a contract, it brings us a moral responsibility.
For it is an agreement, it brings us a legal responsibility.
For it is an oath, it reminds couples that they have promised not only each other but also Allah, and they are under liability.
Jumma Mubarak!


Allah the Almighty (swt) has created human beings in the most beautiful way, and has equipped them with a sound mind, a firm will and a profound heart.
He has bestowed upon them the Qur’an and the exemplary of the prophets to distinguish right from wrong.
Jummah Mubarak !


Our Sublime Lord (swt) reminds us in the Holy Qur’an as: “And [by] the nafs and He who proportioned it;
And inspired it [with discernment of] its wickedness and its righteousness, He has succeeded who purifies it, and he has failed who instills it.
Jummah Mubarak !

It is essential for believers not to curse their nafs, but to train it and equip it with good qualities; keep it under control for any desire against the boundaries drawn by Allah (swt), morality and conscience; and stand by what is good and by the good people while standing against what is evil and the evil people.
Jummah Mubarak !

The clever person is the one who subjugates his soul, and works for what is after death.
And the incapable is the one who follows his desires and merely hopes in Allah.”
Jummah Mubarak !


The best neighbour in Allah's estimation is the one who is best to his neighbour
Jumma Mubarak !...


Supplication is not responded to. In this respect, Prophet Muhammad (saw) states,
"The supplication of every one of you will be granted if he does not get impatient and say, 'I supplicated to Allah, but my prayer has not been granted."
Jummah mubarak !


"O, Allah! I ask you to bless me with guidance, piety, chastity, and contentment.
Jummah mubarak !