JUMMA QUOTES AND SMS IN ENGLISH 9

Do not weaken and do not grieve, and you will be superior if you are indeed believers.
Jumma Mubarak!


It has been adviced in surat Luqman is, which is caring for parents.
“His mother carried him, [increasing her] in weakness upon weakness, and his weaning is in two years.”
That’s why the Almighty enjoins us: “Be grateful to Me and to your parents; to Me is the [final] destination.
But if they endeavor to make you associate with Me that of which you have no knowledge, do not obey them but accompany them in [this] world with appropriate kindness and follow the way of those who turn back to Me [in repentance].
Then to Me will be your return, and I will inform you about what you used to do.
Jumma mubarak!


Prayer is an expression of our faith and submission to Allah, and our believer’s mentality.
It is the manifestation of the awareness that we have a Lord who never abandons us even for a moment and does not leave us alone.
Prayer is the admission of our helplessness with gratitude and praise in the face of Allah’s sublimity.
Jumma Mubarak!

Indeed, with hardship, there is ease...
Jumma Mubarak!

O mankind, fear your Lord, who created you from one soul and created from it its mate and dispersed from both of them many men and women.
And fear Allah, through whom you ask one another, and the wombs that bore you.
Indeed Allah is ever, over you, an Observer
Jumma Mubarak!


Today, both as a nation and as the world of Islam we are going through similar difficulties that our Prophet and the early Muslims who accepted him did. Evil is surrounding us and the entire humanity every passing day. They are trying to put fear in our hearts and weaken us with terror and violence. And the biggest danger we believers must avoid in these times of hardship is to lose hope. To be in discord. To lose unity and togetherness. To give up protecting the brotherhood and being hope to the oppressed.
Jumma Mubarak! 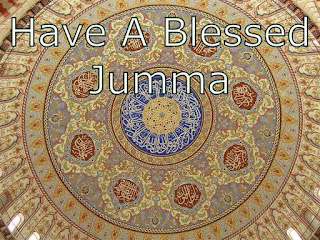 We are the believers of the same religion, the same book, the same prophet as we are the children of the same country, the same culture, and the same history.
The best answer from our nation to evil, violence, and terror is to close the ranks and embrace one another more than ever. To renew the oath of brotherhood. To never allow the discord and sedition they want to instill into our hearts.
Jumma Mubarak!


Assumption about others often misleads and causes one to sin. It leads to misunderstandings and disturbances...
Jumma Mubarak!...


There is a great blessing in this mortal world which gives us peace, makes us stronger in the face of adversity, and keeps our ideals for the future alive.
This blessing is “prayer.”
Prayer is a source of grace and abundance bestowed upon us by the Almighty Lord.
Jumma Mubarak!


Do not backbite each other. Do not talk behind one another’s back..
Jumma Mubarak!...


A Blessed Friday to You, Brothers and Sisters!


There is none who testifies sincerely that none has the right to be worshipped but Allah and Muhammad is his Apostle, except that Allah, will save him from the Hell-fire ...
Jummah Mubarak!


And whoever seeks a religion other than Islam, it will never be accepted of him, and in the Hereafter he will be one of the losers ....
Jummah Mubarak !....


It has been adviced in surat Luqman to his son is that not a single good deed will be wasted in the ranks of Allah.
Even the smallest one will not go unanswered. Because Allah is aware of even the most well-kept things.
He knows everything.
Jumma mubarak!


None of you should court death but only hoping good from Allah.
Jumma Mubarak!we are the followers of a religion that forbids despair. We are the ummah of a prophet that never lost hope for the future no matter the circumstances...
Jumma Mubarak!...


May He grant us power, strength, and fortitude against those who target our future and independence.
May He set us straight on His path. May He always grant us His help, mercy, grace, and protection against the deniers.
Amin.
Jumma Mubarak!

And this worldly life is not but diversion and amusement.
And indeed, the home of the Hereafter that is the eternal life, if only they knew!
Jummah Mubarak !