Sometimes I wonder if men and women really suit each other. Perhaps they should live next door and just visit now and then. ~Katherine Hepburn

The sum which two married people owe to one another defies calculation. It is an infinite debt, which can only be discharged through eternity. ~Johann Wolfgang von Goethe


There is no substitute for the comfort supplied by the utterly taken-for granted relationship. ~Iris Murdoch

When two people are under the influence of the most violent, most insane, most delusive, and most transient of passions, they are required to swear that they will remain in that excited, abnormal, and exhausting condition continuously until death do them part. ~G.B. Shaw, Getting Married, 1908


A first-rate marriage is like a first-rate hotel: expensive, but worth it. ~Mignon McLaughlin, The Second Neurotic's Notebook, 1966

Three rings of marriage are the engagement ring, the wedding ring, and the suffering. ~Author Unknown

I never knew what real happiness was until I got married. And by then it was too late. ~Max Kauffman 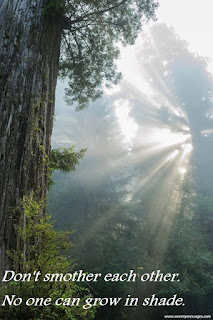 Don't smother each other. No one can grow in shade. ~Leo Buscaglia

Marriage is not a word — it is a sentence.


Our marriage has always been a 50-50 proposition — with the possible exception of closet space. ~Gene Perret

So heavy is the chain of wedlock that it needs two to carry it, and sometimes three. ~Alexandre Dumas, fils


If your husband and a lawyer were drowning and you had to choose, would you go to lunch or to a movie?

A perfect marriage is one in which "I'm sorry" is said just often enough. ~Mignon McLaughlin, The Neurotic's Notebook, 1960


Marriage must constantly fight against a monster which devours everything: routine. ~Honoré de Balzac

The marriage state, with or without the affection suitable to it, is the completest image of Heaven and Hell we are capable of receiving in this life. ~Richard Steele, The Spectator


Adultery is the application of democracy to love. ~Henry Louis Mencken, "Sententiae," A Book of Burlesques, 1920


If you live to be a hundred, I want
To live to be a hundred minus one day,
So I never have to live without you.”
-Winnie the Pooh
“Write a list of ways that you have benefited from being married to your spouse. Then write a
list of your spouse’s positive patterns and qualities. Keep adding to the lists and reread them
frequently.


In marriage, when we honor and celebrate each other, we’re freed up to be the best people we can be.