There are few countries which dedicate a national public holiday to reconciliation. But then there are few nations with our history of enforced division, oppression and sustained conflict. And fewer still, which have undergone such a remarkable transition to reclaim their humanity.
Happy Day of reConciliation! 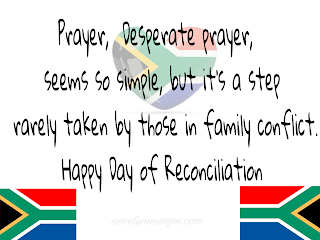 We, the people of South Africa, have made a decisive and irreversible break with the past.We have, in real life, declared our shared allegiance to justice, non-racialism and democracy; our yearning for a peaceful and harmonious nation of equals.

The rainbow has come to be the symbol of our nation. We are turning the variety of our languages and cultures, once used to divide us, into a source of strength and richness.

Prayer, desperate prayer, seems so simple, but it’s a step rarely taken by those in family conflict.
Happy Day of reconciliation!

This thing I am feeling, I’m almost certain, is the closest I’ll ever come to standing somewhere in between truth and reconciliation

We specifically raised agrarian issues to encourage both conflicting parties to find something in common. Our strategy worked. The people eventually agreed to put aside their religious differences and sit together to reach agreements that could sustain reconciliation.

Peace is not the product of a victory or a command. It has no finishing line, no final deadline, no fixed definition of achievement. Peace is a never-ending process, the work of many decisions

Happy Reconciliation Day to everybody in South Africa today!

Forgiveness is the key to action and freedom

No matter how big a nation is, it is no stronger that its weakest people, and as long as you keep a person down, some part of you has to be down there to hold him down, so it means you cannot soar as you might otherwise

When is Day of Reconcillation day ?

The Day of Reconciliation is a public holiday in South Africa, held annually on 16 December.
The intention is to foster reconciliation between different racial groups. The holiday came into effect in 1994 after the end of Apartheid.

History of the holiday

Under apartheid, the 16 December was commemorated as the Day of the Vow, also known as Day of the Covenant or Dingaan Day.

The Day of the Vow was a holiday commemorating the Afrikaner victory over the Zulus at the Battle of Blood River in 1838.

In first part of the 19th century, many Afrikaner farmers left the eastern cape and moved inland. One group of farmers was the Voortrekkers, Afrikaners who where protesting against British colonialism and seeking their own independent republics on what they saw was empty land.

But the land was not empty and clashes with the indigenous people were inevitable. In 1837 the Voortrekker leaders entered into negotiations for land with Dingane, the Zulu king.

In terms of the negotiations Dingane promised the Voortrekkers land on condition they returned cattle to him stolen by Sekonyela (the Tlokwa chief). This Retief did and apparently he and Dingane signed a treaty on 6 February 1838. During the ceremony Dingane had Retief and his entourage murdered. In ensuing battles between Zulus and Voortrekkers over the next few months numerous lives were lost on both sides. On 16 December 1838 about 10 00 troops under the command of Dambuza (Nzobo) and Nhlela attacked the Voortrekkers, but the 470 Voortrekkers, with the advantage of gun powder, warded them off. Only three Voortrekkers were wounded, but more than 3 000 Zulus were killed during the battle.

Before the battle, The Voortrekkers took a Vow before God that they would build a church and that they and their descendants would observe the day as a day of thanksgiving should they be granted victory.