When is Bonifacio Day?

This holiday is celebrated annually on 30 November.
Known in the Philippines as 'Araw ng Kapanganakan ni Bonifacio', this day commemorates the birth of Andrés Bonifacio on 30 November 1863.

Bonifacio was a Filipino nationalist and revolutionary and is considered a national hero. He is often called 'the father of the Philippine Revolution'.
In 1892, Bonifacio was a founder of a secret society called the 'Katipunan' that grew into an armed movement that instigated attacks on the Spanish colonial rulers. Bonifacio became the commander in chief of the revolutionary army of the Katipunan.
The leadership of the Katipunan became fractured and rival factions vied for control. Emilio Aguinaldo eventually took control of the forces.
At a meeting known as the Tejeros convention, a vote was taken to decide who would be president after the over throw of the Spanish. Aguinaldo won, with Bonifacio coming second. Bonifacio rejected the result saying the voting had been rigged and became a rebel leader within a revolutionary government.
This led to his arrest by Aguinaldo, his trial and subsequent execution on 10 May 1897.

As the Katipunan had it's own constitution and was in control of the Philippines before the creation of the first government, many have argued that Bonifacio should be remembered as the first president of the Philippines and not Aguinaldo.
Bonifacio is remembered on his birthday, rather than the date of his death (as in the case of the main national hero, José Rizal) as he was executed by the Filipino revolutionary government and not by the Spanish. 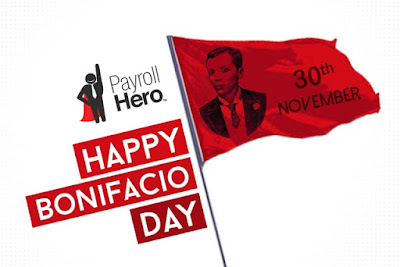 How is Bonifacio Day Celebrated?

This is a national holiday meaning anyone who does work on this day is still entitled to pay.
Schools and most businesses will closed for the day, but shops remain open. Some people may take the time to mark Bonifacio's legacy by visiting monuments dedicated to Bonifacio.