I congratulate the Miraj Kandil night of all our brothers and sisters in the geography of our hearts, and of all the Islamic world. I request from the Almighty that let the Miraj be an occasion for the world of Islam and all humanity to once again embrace the values presented to us by Miraj.

Miraj is the elevation of mankind to humanity…
Miraj Night Mubarak!....


May Allah (swt) let the Lailat al-Mi’raj that we will experience in the night from next Tuesday to Wednesday conduce to the unity and togetherness, the rise and elevation of the Islamic world.


May Allah bless us all this Laylat al-Miraj, with the bounty of increased prayer, faith, and wisdom to discern His signs, on the horizons and in ourselves.  Amin!

Message on the occasion of the Prophet’s ascension to heaven

The miracle of Isra and Miraj is a spiritual voyage that our beloved Prophet undertook with the blessings of Allah in a time frame that was first a trip from the Masjid Haram (Kaaba) to Masjid Aqsa (in Jerusalem) and then his ascension to heaven where our Prophet witnessed the infinite power and verses of the Almighty that contained divine favors, goodness and abundance and loaded with gifts, wisdom and good news. Miraj is the great get together experienced by our beloved Prophet.
Miraj Mubarak!..


Exalted is He who took His Servant by night from al-Masjid al-Haram to alMasjid al-Aqsa, whose surroundings We have blessed, to show him of Our signs.
Indeed, He is the Hearing, the Seeing ....
I wish you a blessed Miraj Night! 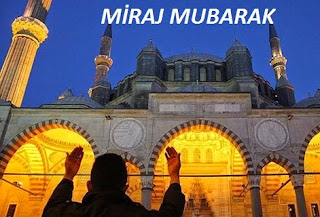 Miraj is the greatest act of being a witness to Allah’s infinity, greatness and unity…
Miraj Mubarak!

Miraj is the greatest act of being a witness to Allah’s infinity, greatness and unity. This act of being a witness and spiritual experience has been crowned with salaat (daily five time prayers), an awareness of responsibility that has been given to us with the Quran verses on Miraj, the good news that those who turn to faith and those who only accept Allah as their creator will see their sins forgiven and will go to heaven. These are the supreme values of Miraj that will lead us to eternity
Miraj Night Mubarak!....

Miraj is ascension and elevation for us. It is the ascension of mankind to humanity, of physics to metaphysics, of the body to the spirit, of the spirit to its owner and of the subject to Allah. Every passing year Miraj teaches us that Allah is the only owner of the path for benediction and elevation and as individuals and humanity it reminds us about the collection of values that will elevate us in this world and the world after. The values of Miraj are values that provide humanity with sacred horizons. The values of Miraj – if we are to define them with their symbolic meanings mentioned in the Quran – is aimed at preventing humans from stumbling down to the lowest of the low and are the supreme values that will elevate the human being to the highest level of perfection and reach the land of heaven where there is eternal tranquility, happiness and righteousness. Today we are in a position to rethink the spiritual and material elevation of the individual, the society and all humanity having been inspired by the ascension of our beloved Prophet to heaven and the values that wre brought to us through Miraj.
Miraj Night Mubarak!.... 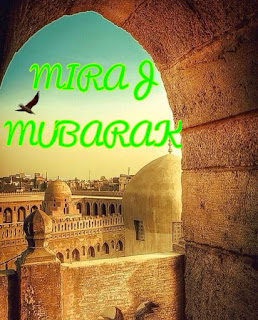 Today we are in need of the values of Miraj more than ever…
Miraj Night Mubarak!....

I would like to state with regret that today as individuals, as a society as the ıslamic wrld and as humanity we are in need of the values presented by Miraj more than ever. The fact that we have failed to halt the shedding of blood and tears in many places across the Islamic geography, the fact that we have not been able to uphold the rules of law and morals that were established by Hazrat Omar on the holy lands where Miraj was experienced that secured people living in peace and harmony for hundreds of years, the fact that oppression and injustices that threaten the peace and tranquility of humanity still prevails sows that Muslims are falling apart with the values of Miraj. We can only overcome these obstacles or similar barriers that prevent the elevation not only of the Islamic world but of all humanity through the values of Miraj. All the believers led by those who carry heavy responsibilities should use the occasion of the Miraj holy night to once again remember the duties and responsibilities that fall on them.
Miraj Night Mubarak!....


Laylat al-Miraj – The Night Journey!
Salaam and Greetings of Peace:

Glory to Allah! Exalted is He who did take His Servant by night from the Sacred Mosque ( al-Masjid al-Haram) to the farthest Mosque ( al-Masjid al- Aqsa), whose precincts We did bless, that We might show him of Our signs. Indeed, He is the Hearing, the Seeing.     – Qur’an 17:1
LAYLAT AL-MIRAJ MUBARAK!!!!

For indeed he saw him at a second descent,
Near the Lote-tree beyond which none may pass:
Near it is the Garden of Abode.
Behold, the Lote-tree was shrouded (in mystery unspeakable!)
(His) sight never swerved, nor did it go wrong!
For truly did he see of the Signs of his Lord, the Greatest!
– Qur’an, 53: 13-18

The story of the Night Journey focuses on how the Prophet Muhammad’s (saw) heart was purified by the archangel Gabriel, who filled him with knowledge and faith in preparation to enter the seven levels of heaven. The exact date of the Journey is not clear, but is celebrated as though it took place before the Hijra and after Muhammad’s visit to the people of Ta’if. It is considered by some to have happened just over a year before the Hijra, on the 27th of Rajab. The Al-Aqsa Mosque and surrounding area, with the Dome of the Rock marking the place from which Muhammad is believed to have ascended to heaven, is the third-holiest place on earth for Muslims.


May Lailat al-Mi’raj conduce to clearness in our minds, freshness in our hearts and peace in our lives.
Let us stand up (for qiyam) shoulder by shoulder by obeying wholeheartedly to the call of Allah (swt) for prayer.
Let us prostrate (sujud) with the fruitfulness of Lailat alMi’raj.
Let us remember the honor of faith and the responsibility of being a servant once more.
Let us not refrain our hope and pray for reaching to the nights of Lailat al-Mi’raj when al-Quds and Masjid al-Aqsa are free.
Miraj Night Mubarak !


Exalted is He who took His Servant by night from al-Masjid al-Haram to alMasjid al-Aqsa, whose surroundings We have blessed, to show him of Our signs.
Indeed, He is the Hearing, the Seeing ....
I wish you a blessed Miraj Night!


Al-Isra is the night journey of our beloved Prophet (saw) from Masjid al-Haram in Mecca to Masjid alAqsa in al-Quds.
Lailat al-Mi’raj is the name of the acceptance to the highest level from Masjid al-Aqsa.
Miraj Night Mubarak !


The Messenger of Allah (saw) returned from Lailat al-Mi’raj with three great gifts to his Ummah.
First of these gifts is the five daily prayers (salat), which is called by the Prophet Muhammad (saw) as “the light of my eye”
Another gift of al-Mi’raj is the last two verses of Surah al-Baqarah, which we know as “Amanar Rasul” and read after the ‘isha prayer every day.
These Qur’anic verses remind us the principals of faith, consciousness of servitude and the sense of responsibility.
These verses state that we will give account for whatever we do in this world, and teach us how to pray and invoke Allah.
The last gift of al-Mi’raj is the herald that sins of the ones among the Ummah of Muhammad (saw) shall be forgiven if they do not associate any partners to Allah (swt) and will finally be rewarded with Jannah.
I wish to all my brothers a blessed Miraj Night !

Please click for more  and newer MIRAJ MESSAGES and IMAGES .....