Funny Quotes About Moving On and Being Happy with Your Life

Here’s to the Future, because I’m done with the Past.– Anonymous

It happens to everyone as they grow up. You find out who you are and what you want, and then you realize that people you’ve known forever don’t see things the way you do. So you keep the wonderful memories, but find yourself moving on.– Nicholas Sparks

Cry. Forgive. Learn. Move on. Let your tears water the seeds of your future happiness.

Goals give you more than a reason to get up in the morning; they are an incentive to keep you going all day.
– Harvey Mackay

I demolish my bridges behind me – then there is no choice but to move forward.

We're never so vulnerable than when we trust someone - but paradoxically, if we cannot trust, neither can we find love or joy. Walter Anderson

Don't dwell on what went wrong. Instead, focus on what to do next. Spend your energies on moving forward toward finding the answer. Denis Waitley 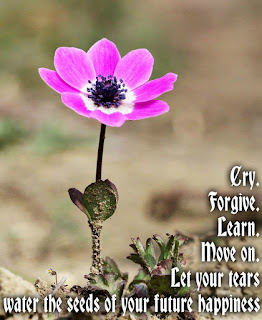 Don’t cry because it’s over, smile because it happened.– Dr. Seuss


I think that the power is the principle. The principle of moving forward, as though you have the confidence to move forward, eventually gives you confidence when you look back and see what you’ve done.– Robert Downey Jr.


Moving on, is a simple thing, what it leaves behind is hard. – Dave Mustaine


Healing takes courage, and we all have courage, even if we have to dig a little to find it. – Tori Amos


Time will make it worse! You're...the other half of his soul. He's never going to get over you. And no matter how much you hope that you will... you'll never get over him. You're going to wake up one day and realize what you've done, and you're going to regret the time you wasted apart from him for the rest of your life.


The greatest healing therapy is friendship and love.


Don’t cry because it’s over, smile because it happened.

Achievement seems to be connected with action. Successful men and women keep moving. They make mistakes, but they don’t quit.
– Conrad Hilton

It's time to say goodbye, but I think goodbyes are sad and I'd much rather say hello. Hello to a new adventure. Ernie Harwell


Everybody we meet has an influence on us and an impact - good or bad. And I think that's why we have to be careful with the way we handle people because what we're doing is making an impact. Ernie Harwell

I think it’s important to have closure in any relationship that ends – from a romantic relationship to a friendship. You should always have a sense of clarity at the end and know why it began and why it ended. You need that in your life to move cleanly into your next phase. – Jennifer Aniston


Life moves on and so should we. –Spencer Johnson

If you think it long and mad the wind of banners that passes through my life
And you decide to leave me at the shore of the heart where I have roots
Remember
That on that day, at that hour, I shall lift my arms
And my roots will set off to seek another land

Some people believe holding on and hanging in there are signs of great strength. However, there are times when it takes much more strength to know when to let go and then do it.– Ann Lander

Grudges are for those who insist that they are owed something; forgiveness, however, is for those who are substantial enough to move on.


I'm done with those; regrets are an excuse for people who have failed.


It is important that we forgive ourselves for making mistakes. We need to learn from our errors and move on.

People can be more forgiving than you can imagine. But you have to forgive yourself. Let go of what’s bitter and move on.


To be able to move on, one has to learn to forgive not only the person (or people) who have done one wrong but also oneself.


Sooner or later we’ve all got to let go of our past.

If you’ve fallen down, today is the day you can get back up and try again.


Laughter gives us distance. It allows us to step back from an event, deal with it and then move on.


It is better to conquer yourself than to win a thousand battles. Then the victory is yours. It cannot be taken from you, not by angels or by demons, heaven or hell.
BuddhaIt was strange, really. A couple months ago, I had thought I couldn’t live without him. Apparently I could.


We must be willing to let go of the life we’ve planned, so as to have the life that is waiting for us.– Joseph Campbell


I demolish my bridges behind me…then there is no choice but to move forward. – Fridtjof Nansen


You only struggle because you’re ready to grow but aren’t willing to let go. – Drew Gerald