Leap years are needed to keep our modern day Gregorian calendar in alignment with the Earth's revolutions around the sun.

However, the Gregorian calendar has only 365 days in a year, so if we didn't add a leap day on February 29 nearly every four years, we would lose almost six hours off our calendar every year. After only 100 years, our calendar would be off by around 24 days! 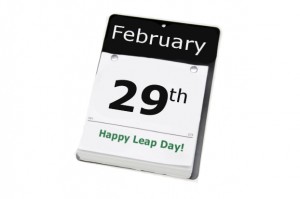 Exactly Which Years Are Leap Years?

We add a Leap Day on February 29, almost every four years. The leap day is an extra, or intercalary, day and we add it to the shortest month of the year, February.

In the Gregorian calendar three criteria must be taken into account to identify leap years:

Roman general Julius Caesar introduced the first leap years over 2000 years ago. But the Julian calendar had only one rule: any year evenly divisible by four would be a leap year.

This formula produced way too many leap years, but was not corrected until the introduction of the Gregorian calendar more than 1500 years later.

Why Do We Have Leap Year?

Even though the standard calendar year is 365 days, the Earth actually takes 365 days 5 hours 48 minutes and 46 seconds to go completely around the sun. (This is called a solar year.) In order to keep the calendar cycle synchronized with the seasons, one extra day is (usually) added every four years as February 29th.

The Julian calendar (established by Julius Caesar in 46 BCE) introduced the Egyptian solar calendar to the Roman world, standardized the 365-day year, and created the predecessor to our current leap year. February 29th was not reflected on the Julian calendar, rather February 23 was repeated every four years.

You may be asking, “The solar year is not a full 365 days and 6 hours, so what about those extra 11 minutes and 14 seconds?” An additional calendar reformation in the 1500s added a special rule to adjust for this discrepancy. In 1582 Pope Gregory XIII created a slightly modified calendar to better account for leap days. Called the Gregorian calendar, this new system said that no century year (like 1900) would be a leap year except for centuries divisible by 400 (like 2000). In order to correct the calendar, the Pope eliminated October 5 through October 14, 1582. The calendar moved directly from the fourth to the fifteenth to align the dates with the seasons again. It feels almost like science fiction to think that ten full days were removed from the calendar in the year 1582.


But where does the phrase leap year come from?

In 365-day years, known as common years, fixed dates advance one day in the week per year. For example, Christmas fell on a Thursday in 2014 and on a Friday in 2015. With the insertion of a leap day, dates (following February) advance two days instead of one. In 2016, Christmas will leap over Saturday to fall on a Sunday.