When someone hurts u . . .
Don't feel bad because its the law of nature
that the tree that bears the sweetest fruits
gets maximum number of stones 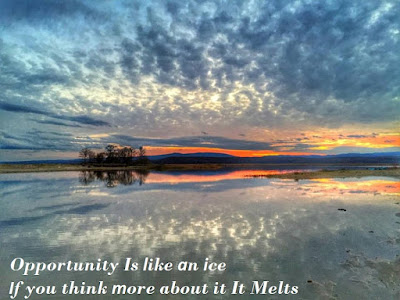 
When you are in light
everything will follow you.

But when you enter dark even
you own shadow will leave you. 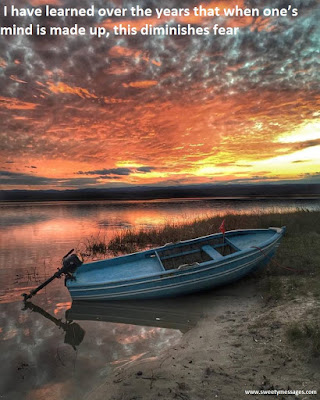 I have learned over the years that when one’s mind is made up, this diminishes fear. —Rosa Parks

Too many of us are not living our dreams because we are living our fears. —Les Brown


What’s money? A man is a success if he gets up in the morning and goes to bed at night and in between does what he wants to do. —Bob Dylan


How wonderful it is that nobody need wait a single moment before starting to improve the world. —Anne Frank 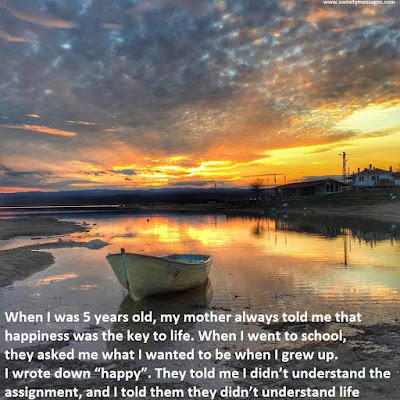 When I was 5 years old, my mother always told me that happiness was the key to life. When I went to school, they asked me what I wanted to be when I grew up. I wrote down “happy”. They told me I didn’t understand the assignment, and I told them they didn’t understand life. —John Lennon

I’ve missed more than 9000 shots in my career. I’ve lost almost 300 games. 26 times I’ve been trusted to take the game winning shot and missed. I’ve failed over and over and over again in my life. And that is why I succeed. –Michael Jordan

The best time to plant a tree was 20 years ago. The second best time is now. –Chinese Proverb


An unexamined life is not worth living. –Socrates


Eighty percent of success is showing up. –Woody Allen 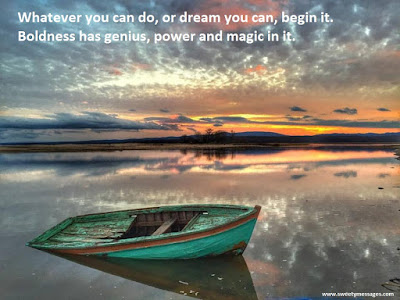 Whatever you can do, or dream you can, begin it.  Boldness has genius, power and magic in it. –Johann Wolfgang von Goethe


People often say that motivation doesn’t last. Well, neither does bathing.  That’s why we recommend it daily. –Zig Ziglar


"When I hear somebody sigh, ‘Life is hard,’ I am always tempted to ask, ‘Compared to what?'" - Sydney Harris

You may find the worst enemy or best friend in yourself. - English Proverb


"Whoever loves much, performs much, and can accomplish much, and what is done in love is done well." - Vincent Van Gogh


"Courage is the first of human qualities because it is the quality which guarantees all others." - Winston Churchill


"The great thing in this world is not so much where you stand, as in what direction you are moving." - Oliver Wendell Holmes

"Education costs money. But then so does ignorance." - Sir Claus Moser

"Defeat is not bitter unless you swallow it." - Joe Clark


"Success is walking from failure to failure with no loss of enthusiasm." --Winston Churchill


"Just when the caterpillar thought the world was ending, he turned into a butterfly." --Proverb


"Successful entrepreneurs are givers and not takers of positive energy." --Anonymous


"Whenever you see a successful person you only see the public glories, never the private sacrifices to reach them." --Vaibhav Shah

"The distance between insanity and genius is measured only by success." --Bruce Feirstein

"What's the point of being alive if you don't at least try to do something remarkable." --Anonymous


"You can do anything, but not everything. --Anonymous


"Innovation distinguishes between a leader and a follower." --Steve Jobs


"Thinking should become your capital asset, no matter whatever ups and downs you come across in your life." --A.P.J. Abdul Kalam

"The function of leadership is to produce more leaders, not more followers." --Ralph Nader

"The successful warrior is the average man, with laser-like focus." --Bruce Lee


"Courage is resistance to fear, mastery of fear--not absence of fear." --Mark Twain


"Develop success from failures. Discouragement and failure are two of the surest stepping stones to success." --Dale Carnegie


"If you don't design your own life plan, chances are you'll fall into someone else's plan. And guess what they have planned for you? Not much." --Jim Rohn


"If you genuinely want something, don't wait for it--teach yourself to be impatient." --Gurbaksh Chahal


"Don't let the fear of losing be greater than the excitement of winning." --Robert Kiyosaki


If you think something will make you happy,
go for it so that
you won't live your life asking, "what if"
and
telling yourself, "if only".


God opens millions of flowers
without forcing the buds,
it reminds us not to force anything
for things happen in the right time.


"You can't connect the dots looking forward; you can only connect them looking backwards. So you have to trust that the dots will somehow connect in your future. You have to trust in something--your gut, destiny, life, karma, whatever. This approach has never let me down, and it has made all the difference in my life." --Steve Jobs

"In my experience, there is only one motivation, and that is desire. No reasons or principle contain it or stand against it." --Jane Smiley


"I don't want to get to the end of my life and find that I lived just the length of it. I want to have lived the width of it as well." --Diane Ackerman


Happiness is not something ready made.
It comes from your own actions.
So if you want to be happy.
Plan your actions accordingly.


The ability to feel pain
is not a weakness, it's a strength.
And those who can endure it, are stronger.


Sometimes, no matter how much faith we have, we lose people.But we never forget them.And sometimes, it's those memories that give us the faith to go on!


In life you always have two options to be in

Your state of life depends on
which one you select most of the time!

“Know your worth”
You must find the courage to leave the table if respect is no longer being served.


Have you ever been so stressed out to the point where you’re actually calm, like you’ve accepted your fate? That’s where i am.